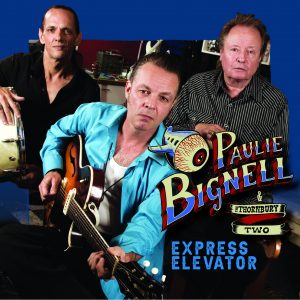 Paulie began writing material for his third album and decided to let his eclecticism off the chain. No genre was sacred as Paulie dives headlong into greasy funk (Boots On), 80s Power Pop (Colour Of Hurt), Southern Soul (Happy Town), a love of Chuck Berry (Eight Tracks And Cadillacs), wigged-out Doo Wop (Only You), some all- tension- and- no- release Blues Rock (Driving All Night), the best song Jagger & Richards never wrote (Express Elevator) and the low down shuffle grover (Crawling Home) Dig deeper into the Bignell oeuvre and his tangled root system of Rockabilly, Country, soulful R&B and flat-out Rock n Roll becomes apparent.

In the beginning, Paulie carved out a reputation with his guitar but now it’s his voice and songwriting that continually carries the best of his solo output. Nonetheless, the guitar is still an integral part of what he does and is. As a guitar slinger who favours toughness over technique, Paulie’s signature style is a witches’ brew of non-linear influences.

A singer/guitarist who hears sounds as opposed to formulas, Paulie may be a Bluesman at heart but he’s not chained to the Blues. In Paulie’s headspace, Blues is a form of self-expression and that allows him to roam all over the psychic roadmap.

All of these untamed riffs and grooves were workshopped, recorded and mixed in Paulie’s home studio, Hailstone, which often functions as a safe haven for many of Melbourne’s Blues & Roots practitioners. That’s much to do with Paulie’s sharp ears and an innate talent to capture lightning in a bottle – as a producer and an engineer; he’s all about the substance rather than the superficial.

Take a tip from Slim Harpo- the music’s hot.