Mix Hound Dog Taylor, Keith Richards and George Thorogood into a wonderful glob of rootsy Rock n Roll and there lies the essence of Paulie Bignell. A proud product of Melbourne’s eastern suburbs, Paulie clearly understands the rowdy, rhythmic drive of the Blues but to call him a Blues revivalist is much the same as calling T-Bone Burnett a sideman. Dig deeper into the Bignell oeuvre and his tangled root system of Rockabilly, Country, soulful R&B and flat-out Rock n Roll becomes apparent.

Paulie’s first two albums, Red Eye Flight and Lost And Dangerous, mixed strong originals with a few Blues and Country nuggets while continually refining the sound in his mind. In 2017, Paulie began writing material for his third album and decided to let his eclecticism off the chain. No genre was sacred as Paulie dived headlong into greasy funk (Boots On), 80s Power Pop (Colour Of Hurt), Southern Soul (You Pick Me Up, Happy Town), a love of Chuck Berry (Eight Tracks And Cadillacs), wigged-out Doo Wop (Only You), some all- tension- and- no- release Blues Rock (Driving All Night), the best song Jagger & Richards never wrote (Express Elevator) and a giddily warped take on the Blues (Blues Free For All).

All of these untamed riffs and grooves were workshopped, recorded and mixed in Paulie’s home studio, Hailstone, which often functions as a safe haven for many of Melbourne’s Blues & Roots practitioners. Over the years, Catfish Voodoo, White Lightning, Amnesia Blues Band, Scotty Baker, Pat Capocci, Rusty Pinto, Collard Greens 7 Gravy, Quarterhorse, Ezra Lee, Paul Buchanan, Three Kings, Ian Collard, Julian James, The Detonators, Dan Dinnen and, more recently, British Country singer/songwriter Tony Clarke have all made their pilgrimages to Hailstone and all have left as satisfied customers. That’s much to do with Paulie’s sharp ears and an innate talent to capture lightning in a bottle – as a producer and an engineer; he’s all about the substance rather than the superficial.

The same manifesto leaks into Paulie’s own music. A singer/guitarist who hears sounds as opposed to formulas, Paulie may be a Bluesman at heart but he’s not chained to the Blues. In Paulie’s headspace, Blues is a form of self-expression and that allows him to roam all over the psychic roadmap. Lyrically, he shuns the shopworn Blues clichés in his quest to be more explicit: a poisoned relationship (Colour Of Hurt), the travails of a pilled-up, strung-out trucker (Driving All Night), stream of consciousness (Blues Free For All, I Ain’t Buyin’) and plainspoken romanticism (You Pick Me Up, Only You).

In the beginning, Paulie carved out a reputation with his guitar but now it’s his voice and songwriting that continually carries the best of his solo output. Nonetheless, the guitar is still an integral part of what he does and is. As a guitar slinger who favours toughness over technique, Paulie’s signature style is a witches’ brew of non-linear influences – Grady Martin, Elmore James, Roy Nichols, Angus Young, Chuck Berry and Hubert Sumlin. What he takes from them he gives back more of himself and that ultimately lifts him above and beyond standard guitar hero fare.

Muscle Shoals guitarist, songwriter and Blue-Eyed Soul Man, Eddie Hinton, used to insist that we never forget or regret where we came from. In the sometimes necessary orbit of pigeon-holing, Paulie’s sonic output has often been labeled “Rock N Roll from the suburbs” and that tag pretty much gets to heart of the matter. Born in the dead centre of Melbourne’s eastern corridor, Paulie has had his Size 9s planted on both sides of the Koonung Creek Valley, home to the improbably named Pobblebonk frog. Before it split apart for the Eastern Freeway, the valley was a stretch of scrub, blackberries and yellow clay that offered Paulie a natural amphitheatre for the rites of his raising – a rough-arsed world of BMX bikes, grass stained trousers, cuts, bruises and twisted ankles accompanied by the jukebox of his mind where Hank Williams, Chuck Berry and Howlin’ Wolf butted heads with AC/DC, Black Sabbath and Rose Tattoo.

Those roots have never deserted Paulie nor has he deserted them. The Koonung Creek itself begins its eleven kilometre course within walking distance of Hailstone studio and, taken to another level, can explain why Paulie has never needed to pretend that he’s from the Mississippi Delta or the south side of Chicago. If there has to be a beast called the Koonung Valley Sound then it has to sound exactly like Paulie Bignell. A sound that demands satisfaction and tolerates no distraction. Take a tip from Slim Harpo- the music’s hot. 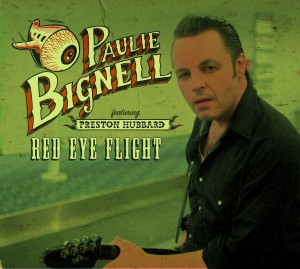 Paulie is well known around Australia for his work with The Detonators. A band he formed over 12 years ago, that has covered every corner of this wide brown land.

He is one hard workin’ guitarist. As with all artists who stand out from pack, he has developed a unique sound and style. His sound, a driving rhythmic guitar, that twangs, yet hypnotizes, screams but seduces.

He sings from where it hurts, the heart – life, love, loss, leaving, yet providing the solution in dancin’ and drinking.

His style is an amalgam, of traditional Rock’n’Roll, Blues, Rockabilly and Country, all from way back when – churned through his musical mix master and presenting as his own style – the Country with a Blues tinge, the Blues with a Country tinge, and all with his raw energetic attitude. Hollering, barking and moaning, stompin’ his feet and yelling at the mic like there’s no tomorrow. Bangin’ on his guitar, buzzin’ around and twisting notes that sting you.

Determined that his premier solo release had to hit hard, he packed his bag and headed to the USA to team up with one of his long time musical peers, Preston Hubbard, (ex The Fabulous Thunderbirds) – a bass man of proportion and distinctions. Utilizing Preston’s drummer, engineer and favorite studio, the tracks were laid down in two days in St Louis. Back to Melbourne for mixing and mastering thus Red Eye Flight is an apt title.

The album is like an old jukebox in your favorite bar, familiar, uplifting and rollicking.
Some great unknowns (originals) and some old favorites. Come on and dance, indeed! 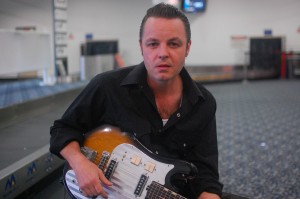 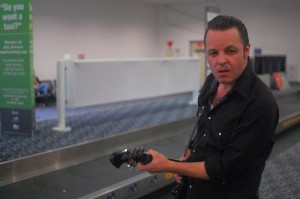